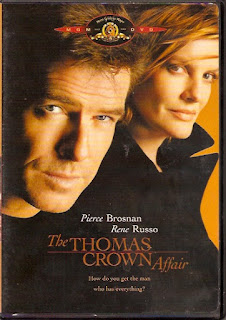 Synopsis: Wow… dullest Bond movie EVER!
Blurb From the DVD Jacket: “Thrill-seeking billionaire Thomas Crown (Pierce Brosnan) loves nothing more than courting disaster - and winning!”
What Did I Learn?: 1) Regret is usually a waste of time, as is gloating. 2) Life is full of shitty conflicts.
You Might Like This Movie If: You know that Denis Leary is just the guy to investigate a big theft.
Really?: 1) Ok, it’s nice that Faye Dunaway has a bit part in this movie, but she has to be the world’s worst psychiatrist (I’m pretty sure that mocking a patient, and then laughing at his misfortune is a big professional no-no), and her scenes with Brosnan are pretty pointless. 2) So, wait… why would Crown paint over the stolen artwork, and then donate it back to the museum, knowing full well it would eventually prove he stole it in the first place? And how exactly does he rip off the painting that Catherine (Russo) likes? I’m sorry, but you can’t make a heist movie without explaining some pertinent technical details. 3a) Um…. New York City detectives are pretty useless, aren’t they? I mean, Catherine discovers every single clue, and single-handedly pieces them all together. She even figures out that Crown has to be the culprit, based on zero evidence. 3b) Speaking of Catherine’s investigation, how does she get away with conducting an illegal search of Crown’s swanky townhouse, and then sleeping with him without the cops arresting her for obstructing justice?
Rating: I hadn’t seen The Thomas Crown Affair since it was released nearly 20 years ago, yet my opinion of it is more-or-less the same: the film is superficial, tedious, and overly long. While I liked Bill Conti’s jazzy musical score, and Denis Leary’s earthy performance as Detective McCann, the script isn’t nearly as clever, compelling, or suspenseful as it should have been (see: “Really?"), and the bulk of the film consists of Brosnan and Russo enjoying a ridiculously luxurious lifestyle while the audience waits for something to happen. I cannot recommend this movie. 4.5/10 stars.
Would it Work For a Bad Movie Night?: Probably not, but take a drink any time Brosnan or Russo change outfits.