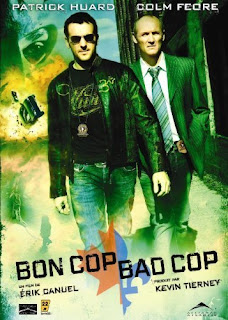 Happy Canada Day! (Please click the links to read my reviews of The Silent Partner, Strange Brew, It Seemed Like a Good Idea at the Time, Hard Core Logo, Joshua Then and Now, The Trailer Park Boys: Countdown to Liquor Day, The Trailer Park Boys Christmas Special, Mr. Patman/Crossover, Heavy Metal, Lost and Found, Hitman Hart: Wrestling with Shadows, and Splendido Secrets)
Synopsis: It has all the makings of a great buddy cop thriller…if it wasn’t for all that damned French!
Blurb From the DVD Jacket: “Two Canadian detectives, one from Ontario and the other from Quebec, must work together when a murdered victim is found on the Ontario Quebec border line.” [Taken from imdb.com. I don’t have a DVD jacket for this sucker]
What Did I Learn?: 1) Placing people in the trunk of a car is a Quebec tradition. 2) Just because you can film a movie that features equal parts of French and English dialogue doesn’t mean that you should.
You Might Like This Movie If: You want to learn a thing or two about using Québecois profanities.
Really?: So wait…. Ward and Bouchard kidnap the hockey commissioner, rough him up, throw him in the trunk of a car, and trade him to a deranged psycho? I realize they’re desperate to get Bouchard’s daughter back in one piece, but couldn’t they go to their superior officers and get some help? It’s a little hard to sympathize with these guys after they do this to an innocent bystander, and I couldn’t imagine how they could stay out of jail, let alone keep their jobs after doing so.
Rating: Bon Cop, Bad Cop is a highly contrived, but very enjoyable action-comedy that manages to poke fun at both Hollywood cop movie clichés and Canada’s long-standing national unity divide. Huard and Feore share some great chemistry, and the film is often quite funny (the moment when they accidentally sever a corpse found on the Ontario-Quebec border sign into two parts is priceless). That said, the scenes involving Rick Mercer as blowhard "Tom Berry", and Rick Howland as “Harry Buttman” are so over the top they don’t fit with the rest of the movie’s tone. Moreover, I found the constant switching between English and French to be a bit gimmicky. It’s hard to do my ritual of dinner-with-a-movie when I have to constantly watch the screen for new subtitles. 8/10 stars.