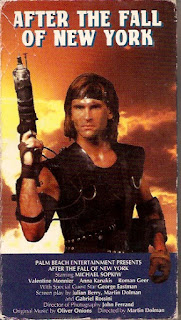 Synopsis: Call your lawyer, Mr. Carpenter.
Blurb From the VHS Jacket: “Handsome, virile actor Michael Sopkiw stars in this futuristic thriller of life on Earth after the world’s third thermonuclear war. All that remains is a radioactive wasteland, the once civilized inhabitants reduced to scavenging warring tribes, the two most powerful known as Eurax and the Pan American Confederation.”
What Did I Learn?: 1) A little spontaneous collaboration never hurt anyone. 2) It’s inevitable that an overdeveloped society will eventually come to the point of its own destruction.
You Might Like This Movie If: you're not deterred by a less-than-stellar review.
Really?: 1) Funny how the Euraks have “fused” Europe, Asia and Africa into one continent, with one “master race,” yet nearly everyone in this movie appears to be Italian. 2) Wait…the Euraks need living New Yorkers for horrible medical experiments, yet when their would-be specimens don’t volunteer for vivisection, they simply hunt down New Yorkers and shoot them dead in the streets? 3) So, how do the Pan-Am Confederates know the only fertile woman left on Earth is in New York City, and how did she manage to escape sterility? 4) Hmm…. There seems to be an awful lot of intact infrastructure - factories, nice buildings, power lines, etc, even though this film supposedly takes place after Earth’s “third thermonuclear war.” 5) The lead Eurak interrogator actually says: “We have ways of making you talk.” 6) Hold on…. The female Eurak commander releases Parsifal from his restraints, kisses him passionately, and he spills the beans about his mission to New York City? And then his captors more-or-less abandon him so he can free his friends? 7) How can a movie have a "special guest star?"

Rating: After the Fall of New York is a long-forgotten, sloppily-produced European rip-off of John Carpenter’s Escape From New York, the Mad Max films, and those weird, early-1980s warriors-in-the-wasteland epics such as Spacehunter: Adventures in the Forbidden Zone. After the Fall of New York is unoriginal, poorly acted, and marred by bargain-basement special effects and some laughably-awful fight scene choreography. I cannot recommend this movie. 2/10 stars.
Would It Work For a Bad Movie Night?: Absolutely! Take a drink any time Parsifal (Sopkiw) gets beaten up and captured.