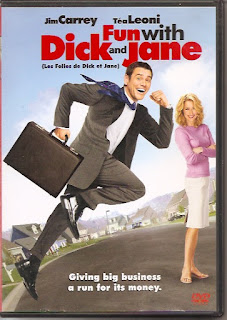 Synopsis: Heavily-indebted corporate executive loses his job, and…..oh, who are we kidding? It’s basically 90 minutes of Jim Carrey acting like a hyperactive idiot.
Blurb From the VHS Jacket: “When Dick Harper (Jim Carrey) is terminated as Globodyne Corporation’s VP of Communications, he assures his wife, Jane (Téa Leoni), he’ll find another job in no time. Madder and desperate than ever, Dick and Jane turn to the fastest-growing sector in the white-collar job market - armed robbery - as they become upscale suburban Robin Hoods, stealing from the rich and giving to the poor….namely themselves.”
What Did I Learn?: 1) Globodyne is a consolidator of media properties. 2) Apparently, it’s really easy to sneak around through a commercial bank building, and surreptitiously enter and exit executive office suites. 3) We’re all just cavemen, trying to protect our patch of land.
You Might Like This Movie If: You really want to watch somebody melt down during a network news interview.
Really?: 1) See “What Did I Learn, #2”, 2) I'm not sure a stock can drop to $0 a share in mere minutes, but let's chalk that up to creative screen writing. A more pertinent question is this: Dick serves as Globodyne’s Vice President of Communications, but had he ever appeared on television, or been interviewed by a reporter before his big flop on a national broadcast? One assumes he would be a little better at spinning corporate BS.
Rating: Fun With Dick and Jane has a few good moments, but it’s an unnecessary, and uninspired remake of the 1977 classic (most of the best material comes from the original), and Carrey nearly ruins it with an over-the-top and grating performance. Moreover, the script’s message about late 1990s/early 2000s Enron-style corporate fraud seems a bit tacked-on. 6/10 stars.