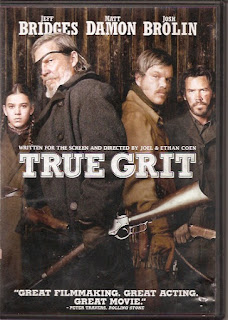 Please click the link to read my review of the original True Grit, starring John Wayne and Kim Darby. Oh, and this would have been perfect for my tribute to Jeff Bridges!
Synopsis: Smug Texan, one-eyed drunk, and precocious 14-year-old girl go a-killin’.
Blurb From the DVD Jacket: “True Grit is a powerful story of vengeance and valour set in an unforgiving and unpredictable frontier where justice is simple and mercy is rare.”
What Did I Learn?: 1) Malum in se. The distinction is between an act that is wrong in itself, and an act that is wrong only according to our laws and mores. 2) You must pay for everything in this world, one way and another. There is nothing free except the grace of God. 3) The world is vexing enough without hypotheticals. 4) “Futile” is not spelled f-u-d-e-l.
You Might Like This Movie If: You want to watch a highly individualistic woman with a lot of... *ahem*... true grit.
Really?: 1) Wait - Mattie is the protagonist, yet Hailee Steinfeld isn’t even billed on the DVD jacket? And Josh Brolin receives third billing, even though we don’t even meet Tom Chaney until well into the third act? That doesn’t seem right. 2) So, does Rooster (Bridges) say anything of any importance when he’s drunk? He mumbles so much that I was lucky to make out every third or fourth word. 3) Hold on…. Ned Pepper knows that Chaney will murder Mattie the first chance he gets, but he leaves him alone with her with nothing but a warning? That seems a bit contrived.
Rating: Written, directed, and produced by Joel and Ethan Coen, and featuring fine performances from Bridges and Brolin (Steinfeld is outstanding as Mattie Ross, and easily carries the picture with a plucky charm) True Grit is a Western masterpiece that somehow manages to outshine the 1969 classic. My only complaint - and it is an important one - is that Tom Chaney (Brolin) really should have been introduced a lot sooner than the last 20-30 minutes of the movie. 9/10 stars.