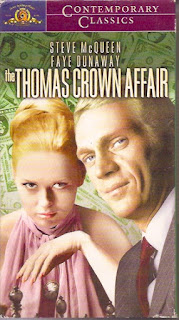 Synopsis: Bored, bank-robbing billionaire matches wits with amoral, cold-as-ice insurance investigator, and….wait, why exactly are we supposed to care about either of these characters?
Blurb From the VHS Jacket: “Brilliantly created by the Oscar-nominated director of Moonstruck, and starring Academy Award-winning actress Faye Dunaway (Network), and the legendary Steve McQueen (The Great Escape), The Thomas Crown Affair has all the suspense and action of a taut and intriguing modern-day crime caper.”
What Did I Learn?: Split-screen cinematography is best used sparingly.
You Might Like This Movie If: You really want to watch a sexy game of chess.
Really?: 1) I realize Crown is a danger-seeker, and Vicky (Dunaway) is an intelligent and attractive woman, but gee… if I discovered that some pushy insurance investigator was looking into my business, I’d probably lawyer-up and find a way to get a restraining order. I don’t think I’d take her out for expensive dinners, or allow her into my home. 2) It’s one thing to threaten one of Crown’s accomplices with serious jail time if he doesn’t cooperate, and quite another to kidnap his son. I lost a lot of sympathy for Vicky after that incident. 3) If I ever have to hear Michel Legrand’s God-awful “Windmills of your mind” again, I’m going to hurt somebody.
Rating: I was surprised to read that Steve McQueen regarded The Thomas Crown Affair as his favourite self-starring movie, as he’s very much out of character as a billionaire playboy, and he made much better movies in the 1970s. McQueen and Dunaway share some great cat-and-mouse chemistry, and I’ll never certainly never forget that chess scene! Still, once the initial caper is completed, the film is mostly stylish build-up that doesn’t really go anywhere. 7/10 stars.