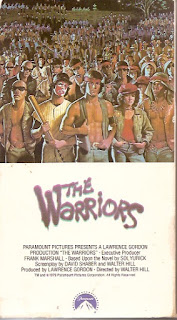 Synopsis: Wily Warriors witness windbag warlord’s wicked whacking, wisely withdraw warily, wending way without warm welcome.
Blurb From the VHS Jacket: “A battle of gigantic proportions is looming in the neon underground of New York City. The armies of the night number 100,000; they outnumber the police 5 to 1; and tonight they’re after the Warriors - a street gang blamed unfairly for a rival gang leader’s death.”
What Did I Learn?: Peppering a speech with plenty of “Can you dig it?”s is a great way to encourage audience participation.
You Might Like This Movie If: You've always wanted to take a subway ride to Coney Island.
Really?: 1) So…why does that rival gang kill Cyrus? This is never really explained. 2) Do multi-ethnic street gangs exist outside of Hollywood movies? I can’t answer that question, but I’m pretty sure no gang would be dumb enough to enter a street fight wearing roller-skates! (And don’t get me started on the Baseball Furies….) 3) Speaking of the Furies, it's not that easy to beat up a guy with your bare hands when he's carrying a baseball bat, yet our heroes apparently have no trouble disarming, and knocking out gentlemen whose specialty is club-fighting. 4) So, do any of these guys have a friend, or a relative who owns a car? One simple phone call could have solved their entire problem. 5) Much of the tension in the film is based on the personality clash between Swan (Michael Beck) and Ajax (James Remar), so it loses a bit of steam when the latter is arrested by an undercover cop mid-way through, and we never see him again.
Rating: If you ever wanted to see a prequel to Escape from New York that didn’t involve Snake Plissken, The Warriors comes pretty close to being one. Directed by Walter Hill, this cult classic works well as an edge-of-your-seat thriller, and it provides a fascinating snapshot of New York City's tired-looking public infrastructure in the late 1970s. That said, The Warriors also suffers from an unpolished script, and it’s populated with a lot of angry, hard-edged, and rather unlikeable characters who don’t do very much to deserve the viewer’s sympathies. Check it out if you want to see its clear influence on later films. 7/10 stars.