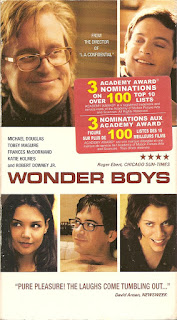 Synopsis: It’s basically 112 minutes of rumpled literary snobs driving around a run-down college town in the dead of winter.

Blurb From the VHS Jacket: “During a single hectic weekend, college professor Grady Tripp (Michael Douglas) scrambles to gather together a life that has suddenly reeled out of control.”

What Did I Learn?: 1) Wearing a ratty old women’s bathrobe will not help you become a better writer. 2) Writers need to make choices, and um....nobody wants to read a 2600-page novel.

You Might Like This Movie If: You've always wanted to see Michael Douglas as a confused authority figure.
Really?: So, wait... Grady rents out a room to Hannah (Katie Holmes), and she’s also one of his students? Wouldn’t that relationship raise some eyebrows?

Rating: Wonder Boys bombed at the box office shortly after it was released, but it’s actually a clever, and funny, and highly enjoyable little gem of a film. Douglas plays against type as a burnt-out, pot-smoking goofball, and he’s supported by an impressive cast (although Holmes’ role seems a little tacked-on). Highly recommended. 9/10 stars.