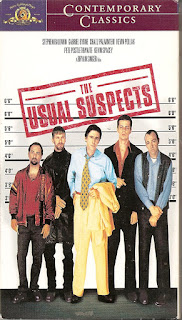 Blurb From the VHS Jacket: “'The greatest trick the devil ever pulled was convincing the world the didn’t exist,' says con man Kint (Kevin Spacey), drawing a comparison to the most enigmatic criminal of all time, Keyser Soze. Kint attempts to convince the feds that the mythic crime lord not only exists, but is also responsible for drawing Kint and his four partners into a multi-million dollar heist that ended with an explosion in San Pedro Harbor – leaving few survivors.”

What Did I Learn?: 1) See: “Synopsis.” 2) One cannot be betrayed if one has no people. 3) A man can convince anyone he's somebody else, but never himself.

You Might Like This Movie If: You really want to watch high-IQ police officers grill a master criminal.
Really?: 1) Um....isn’t [NO SPOILERS] a little young to be Keyser Soze, a crime boss who rose up through the Turkish mafia decades earlier? And how did he lose his accent, and become so Americanized so quickly? 2) Hmm... instead of manipulating, and blackmailing a bunch of New York City burglars and armed robbers into attempting a suicide mission, why doesn’t Soze simply hire and pay a band of mercenaries to attack the ship? Wouldn’t that be a whole lot easier? 3) So, what would have happened to Soze’s plans if Keaton said “No” to the Sol Berg job, and simply went home?

Rating: The Usual Suspects is a little implausible (see: “Really?”), but wow – even if you know the film’s “twist” ending, it’s still an incredibly compelling thriller that’s filled with crackling dialogue and fine performances. I liked Gabriel Byrne’s portrayal of the fatalistic Dean Keaton, but the interrogation scenes of Chazz Palmintieri grilling Spacey are electrifying. Highly recommended. 10/10 stars.