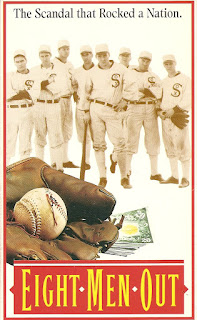 Hey, this would have been perfect for my tribute to John Cusack’s movies.

Synopsis: Big Money destroys beloved sport and ruins the lives of professional athletes. Oh wait, that’s the synopsis for Blue Chips...and North Dallas 40...and The Program...and...Any Given Sunday, and....

What Did I Learn?: If you’re going to orchestrate a major criminal conspiracy, and you need a few of your work colleagues to buy-in, it’s a really good idea to ask for the entire bribe up-front.

You Might Like This Movie If: You know that "black sox" are much cooler than "white sox."
Really?: Eight Men Out is based upon the real-life Chicago Black Sox scandal, so it might be a little unfair of me to judge this film on its overall credibility. That said, I had a bit of a hard time believing so many of these ballplayers would openly talk about throwing ballgames in public places where they could have been easily overheard, or meet with underworld figures in hotel rooms/bars with Charlie-fucking-Comiskey staying in a room just down the hall. Wouldn’t they have been a little more discreet, or was this done for dramatic license?

Rating: Eight Men Out is a good period film that could have been even better if it was more of a docu-drama, and less of a morality play. There’s a lot to like in this movie (I especially enjoyed Studs Turkel’s portrayal of cynical sportscaster Hugh Fullerton), but many of the facts of the scandal are oversimplified, and writer/director John Sayles never really challenges his audience; there are certainly good guys (Cusack’s Buck Weaver, and Shoeless Joe Jackson, obviously) and villains, but you won’t find many shades of grey, which might have made for a more interesting movie. 7/10 stars.