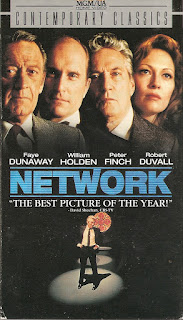 Synopsis: Just imagine a two-hour episode of The Mary Tyler Moore Show, except Lou is a burnt-out weakling, Mary has lost her moral compass, and Ted Baxter is completely insane.

Blurb From the VHS Jacket: “Even more compelling than when it was first released, Network is a wickedly funny, dead-on indictment of the TV news media.”

What Did I Learn?: There is no America. There is no democracy. There is only IBM, and ITT, and AT&T, and DuPont, Dow, Union Carbide, and Exxon.

Really?: 1) I had a bit of a hard time believing an American TV network would establish a symbiotic relationship with a home-grown Maoist terrorist group without facing criminal charges or at least a massive boycott campaign. 2) So wait – Dana (Faye Dunaway) plays a key role in getting Max (William Holden) fired, and she’s shamelessly exploiting his best friend’s insanity, and he wants to leave his wife to be with her? WTF? 3) Hold on – the Network President (Ned Beatty) yells at Beale (Peter Finch), and Beale immediately does a 180? Considering he has the hottest show on television, why doesn’t he tell Arthur Jensen to jump in the lake and then take his show to a rival network? I really didn't buy that scene.

Rating: Network is a scathing – and surprisingly prescient – satire of the American television industry in the mid-1970s. The film won four Academy Awards (including best screenplay), and it’s filled with impressive performances. Network is a very good film, but it left me feeling cold for the simple reason that none of its characters are even remotely likable. 7.5/10 stars.