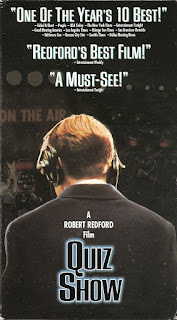 Synopsis: It’s the most *AHEM* trivial scandal in American history!

Blurb From the VHS Jacket: “It’s an exciting look behind the scenes of the thrills and high-stakes competition of TV’s hottest big money game show!”

You Might Like This Movie If: You pine for the days when TV game shows were classy and educational.
Really?: So wait, Herbie Stempel (John Turturro) collected over 70 grand (1950s dollars!) in prize money, and we’re supposed to give a crap that he was ordered by the network to take a dive?

Rating: Produced and directed by Robert Redford, Quiz Show is best described as an intelligently-written, but somewhat overrated period drama. Quite honestly, it’s tough to care one way or the other about the storyline (see: “Synopsis” and “Really?”), which eventually gets bogged down somewhere in the second act. 7/10 stars.