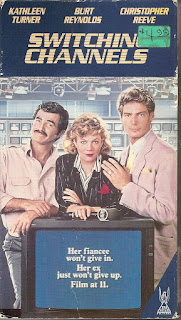 Salute to Television Movie #1 (Please click the links to read my reviews of UHF, The Mogul/The Ratings Game, and Delirious)

Oh, and this would have been perfect for my salute to Burt Reynolds last year.

Synopsis: It’s basically The Front Page, stripped of its original, snappy dialogue, and performed by former A-list stars who were past their prime in 1988.

Blurb From the VHS Jacket: “All is fair in love and war, not to mention news, weather and sports in this contemporary screwball comedy starring three of Hollywood’s most popular stars.”

What Did I Learn?: Apparently, Chicago means “the smell of wild onions,” while New York means “New York.”

You Might Like This Movie If: You know that anything can happen in the wild and crazy world of 24-hour cable news.
Really?: 1) For obvious reasons, it’s sort-of amusing that Christopher Reeve’s character would be deathly afraid of heights, but man, this joke gets old, fast. 2) Speaking of Reeve, he starts out as a nice, sensitive fellow – he even saves Christy’s (Kathleen Turner) life in a boating accident – and then turns into an anal-retentive control freak. It’s almost as though screenwriter Jonathan Reynolds didn’t really know how to handle him. 3) See: “Synopsis”. Seriously, why in the world would you do a remake of The Front Page without using a single line of dialogue from the source material? Even the character names have been changed!

Rating: I wouldn’t say that Switching Channels is a bad movie, but it comes perilously close to being one. Reynolds, Turner and Reeve do their best with the script, but as a send-up of the 24-hour cable news industry, Switching Channels isn’t particularly funny or insightful, and the new material doesn’t really fit with the storyline from The Front Page. 5.5/10 stars.