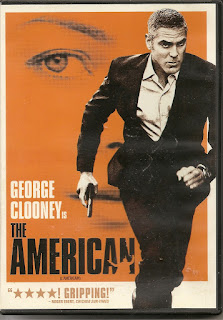 Synopsis: Dangerous assassin drinks a lot of espresso, and, um....that’s about it, really.

Blurb From the DVD Jacket: “After a job ends more violently than expected, Jack (George Clooney) retreats to the Italian countryside and accepts one last assignment to construct a deadly weapon for a mysterious contact.”

What Did I Learn?: It’s rather difficult to sympathize with a movie protagonist after he murders an innocent woman in cold blood within the first 5-10 minutes.

You Might Like This Movie If: You'll watch anything that involves something that's American, and potentially lethal.
Really?: 1) See: “What Did I Learn?” 2) Considering at least a third of the dialogue is in Italian, I have to seriously ask why the subtitles appear in an illegible 8-point font. This has to be one of the worst professional captioning jobs I’ve ever seen. 3) So, who is Jack? Why did he become an assassin? Why doesn’t he have a woman in his life? Who does he work for, exactly? Gee... don’t you need to actually flesh out a character in order to create a character-driven drama? 4) I still can’t believe Roger Ebert gave this movie a glowing review.

Rating: While I have to applaud George Clooney for playing against type in The American, the film itself is boring, grim, and completely humourless. By the end, I simply didn’t care what happened to Jack, because Director Anton Corbijn never gave me a reason to care. I cannot recommend this movie. 4/10 stars.

Would It Work For a Bad Movie Night?: Nah, it’s far too dull. But take a drink every time Clooney sits in a cafe, looking cool.