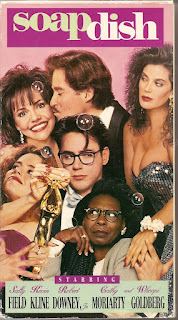 Synopsis: Whoa...it’s a soap opera within a soap opera!! Wait, that was the Synopsis for Delirious.... and Tune in Tomorrow, come to think of it

Blurb From the VHS Jacket: “Sally Field leads an all-star cast in this sidesplittingly funny look at a scandal-ridden TV soap opera.” [Sidesplittingly?]

What Did I Learn?: 1) Actors don't like to play coma. They feel it limits their range. 2) Doing dinner theatre is horrible. 3) “Peppy” and “cheap” are better than “depressing” and “expensive.”


Really?: 1) The movie ends with a live broadcast of The Sun Also Sets. Seriously – a live broadcast? 2) Couldn’t Celeste have found some way to inform Jeffrey of his relationship with Lori without making a fool of herself in front of both the entire cast, and the entertainment reporters.

Rating: I wanted to like Soapdish a little more than I did. Sally Field and Kevin Kline share some wonderfully acidic exchanges, Robert Downey Jr. is good as a slimy TV exec, and Terri Hatcher is fun to watch in a before-they-were-famous role. Soapdish certainly has its moments, but the plot is far too contrived for it to be believed (see: “Really?”) , and its comedy really isn’t terrible insightful or clever – every scene seems to end with a big shouting match, and the whole thing struck me as a screenwriter’s fantasy of a soap opera set, rather than a real satire of the genre. Oh – watch for veteran TV producer Garry Marshall in a wonderfully funny cameo. 6/10 stars.