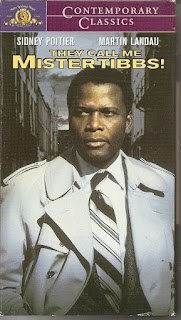 Please click the link to read my review of In the Heat of the Night.

Synopsis: It’s the long-awaited sequel to In the Heat of the Night, except...there’s no Southern sheriff, no racism, and Virgil Tibbs is a child-abusing jerk. Hmm...it isn’t much of a sequel, is it?

Blurb From the VHS Jacket: “They call him Mister Tibbs, one of the toughest, shrewdest, most resourceful detectives ever to carry a badge.”

What Did I Learn?: Ed Asner really shouldn’t wear a toupee.

You Might Like This Movie If: You'll watch anything that involves a tough-as-nails African-American who insists upon referring to himself as "Mister."
Really?: 1) So, wait – in the film, In the Heat of the Night, Virgil Tibbs was a Philadelphia cop. Now he’s based in San Francisco, and he and his wife have known Rev. Sharpe for over 15 years. Aren’t we owed at least some explanation for this inconsistency? 2) See: “Synopsis”. Seriously, Tibbs catches his grade school-age son smoking cigarettes, and he decides to teach him a lesson by giving him a cigar and a glass liquor? Even worse, Tibbs slaps his son across the face several times to get him to pick up some Lego. All of this is rather disturbing. 3) Funny how NOBODY ever once addresses the protagonist as “Mister Tibbs” – it’s always “Virge.” 4) THAT’s the ending? Seriously? Why did I invest two hours into this story?

Rating: They Call Me Mister Tibbs! isn’t a bad movie by any stretch, but much like The French Connection II, it’s an unnecessary sequel that isn’t as good as the original. Moreover, the plot tends to meander, and Tibbs’ questionable parenting skills make him surprisingly unlikeable to a modern audience. 6/10 stars.