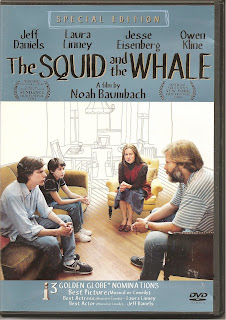 Synopsis: The year was 1986: Our World was getting creamed by The Cosby Show, Oldsmobile had a new Calais, and divorce was a bummer.

Blurb From the DVD Jacket: “In his third feature, director Noah Baumbach scores a triumph with an autobiographical coming-of-age story about a teenager whose writer-parents are divorcing. The father (Jeff Daniels) and mother (Laura Linney) duke it out in half-civilized, half-savage fashion, while their two sons adapt in different ways.”

What Did I Learn?: 1) Back in 1986, Short Circuit was a much better date movie for teenagers than Blue Velvet 2) You can’t use the word “Kafkaesque” to describe the works of Franz Kafka.

You Might Like This Movie If: You figure it must be an 81-minute version of this.
Really?: The Squid and the Whale is a very realistic movie that never really leaves you wondering about its credibility. Still, I had a bit of a hard time believing Walt would ask his dad to tag along on his date. And come on – Walt has a chance to lose his virginity with Sophie, and he passes it up to pursue Lili instead? (Then again, maybe it’s a reflection of his age. In my teens, I knew next to nothing about women, and there’s still plenty I don’t understand).

Rating: It’s funny – while I didn’t think much of Noah Baumbach’s first film, Kicking and Screaming, his third, The Squid and the Whale, is an intelligent, well-written character drama that features some great performances (Daniels and Linney are especially good as Walt’s somewhat-unlikeable-but-strangely-sympathetic parents) richly deserved its three Golden Globe nominations. It’s a thought-provoking movie that will stay with you for a long time. Highly recommended. 9/10 stars.