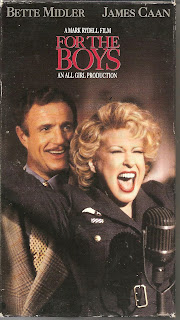 War Movie #6 (Hmm…this also would have worked for my tribute to George Segal last month – he certainly picked some bad scripts!)

Synopsis: Midler and Cann scream at each other through three different wars.

Blurb From the VHS Jacket: “Bette Midler gives the brassiest, sassiest performance of her career as Dixie Leonard…. A USO singer whose electrifying stage presence, and flair for outrageous comedy, captivates troops and civilians alike.”

What Did I Learn?: Dick jokes = guaranteed laughs.

You Might Like This Movie If: You firmly believe Bob Hope was really, really funny.
Really?: 1) I’m sorry, but that whole USO-show-in-a-Vietnamese-firebase scene left me shaking my head. I’m pretty sure the US Army would never allow a performance like that in the middle of nowhere, in a location where it can’t guarantee the safety of the performers, and sure – I realize the soldiers have been away from home for a long time, but I had a hard time believing one of the men would shout: “Show us your tits!” at Dixie, when the entire company knows she’s their captain’s mom. 2) Yeah – Dixie tells a joke about group sex on a live TV broadcast circa 1950. I’m pretty sure that would be the end of her career right there.

Rating: As a longtime fan of James Cann (Thief was fantastic), I wanted to like For the Boys, but it’s a bad movie in spite of a couple of good musical numbers. What's wrong with it? Well, the story doesn't go anywhere, the dialogue is absolutely terrible, the characters are cartoonishly-loud and never develop (in part because everything is told through flashbacks) and the whole thing gets tedious after the first half hour. I cannot recommend this movie. 3/10 stars.

Would It Work For a Bad Movie Night?: No, but take a drink every time Cann and Midler get into one of their big screaming matches.