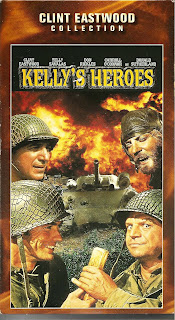 Synopsis: American soldiers go behind enemy lines to steal a shitload of gold. Hey, it’s just like Three Kings, without all those scenes of excruciating torture.

Blurb From the VHS Jacket: “Most of them were goldbricks until they found out about the gold bricks – a fortune in Nazi-confiscated bullion!”

What Did I Learn?: There’s a pretty good chance that a guy named “Crapgame” is going to be a shifty operator.

You Might Like This Movie If: You know that lots of things can go wrong when you set out to rob a bank.
Really?: 1) Hippies. In the US Army. During the Second World War. 2) You know, one problem I’ve always had with this film (and with Three Kings, while we’re at it) is this: what would our heroes do with all of that gold, assuming they make it back to their base in one piece? Would they trust Crapgame to sell it in Paris? Would they find a way to ship it back to the US? I mean, gold is heavy, and they have boxes of the stuff.

Rating: Kelly’s Heroes isn’t a terribly plausible war movie – I really don’t think soldiers could get away with writing their own orders, using Army equipment and ordnance, and sneaking away for a few days to pull a looting expedition – but it’s funny, and highly enjoyable as long as you don’t take any of it too seriously. Oh, and kudos to Telly Savalas for stealing the picture – that’s quite impressive when you realize he competes with Clint, Donald Sutherland and Don Rickles for screen time. Highly recommended. 9/10 stars.