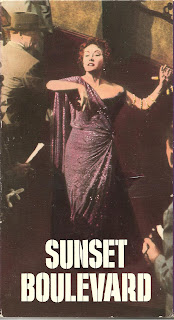 
Blurb From the VHS Jacket: “Gloria Swanson as Norma Desmond, an aging silent film queen, and William Holden as the struggling writer who is held in thrall by her madness, created two of the screen’s most memorable characters in Sunset Boulevard.”


What Did I Learn?: If you run into somebody with a tenuous grip on reality who happens to be carrying a firearm, it’s a really good idea to be super-nice to them.


Really?: How did those goons from the collection agency know that dude’s car was stashed in Norma’s garage? The obvious answer would be that Norma and Max tipped them off to prevent him from leaving, but that should have been revealed in the script.


Rating: Gloria Swanson is a little over the top, and I had a bit of trouble believing William Holden's character would stick around as long as he does, but Sunset Boulevard is a well-written and incredibly engaging film. Far ahead of its time. 8.5/10 stars.