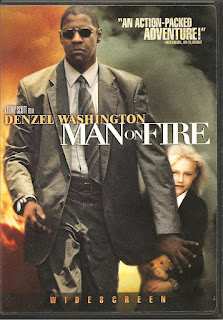 Synopsis: Alcoholic assassin finds redemption for his sins through the love of a young child. Once she’s kidnapped however, it’s CREASY GETS GREASY!


Blurb From the DVD Jacket: “Two-time Academy Award winner Denzel Washington ignites a masterpiece of mayhem in this ‘powerful’ (LOS ANGELES TIMES) action-thriller. Hard-drinking, burned out CIA operative John Creasy (Washington) has given up on life – until his old friend Rayburn (Oscar winner Christopher Walken) gets him a job as bodyguard to nine-year old Pita Ramos (Dakota Fanning). Bit by bit, Creasy begins to reclaim his soul, but when Pita is kidnapped, Creasy’s fiery rage is released and he will stop at nothing to save her.”


What Did I Learn?: When a movie hero buys rocket-propelled grenades(!!) during an out-for-revenge weapons purchase, there’s a very good chance he’s going to use them at some point.


You Might Like This Movie If: You’re ok with the knowledge that there aren’t any original ideas, anymore.


Really?: 1) Creasy gets shot full of holes, and yet he’s back on the street (still bleeding!) within a fairly short period of time. 2) Creasy shoots a dude at point-blank range in a car and doesn’t get a drop of blood on his clothing. 3) Would any bodyguard really agree to trade away his own life, especially if there’s a very good chance he’s going to experience excruciating torture before death?


Rating: Man on Fire is a depressing, and rather unpleasant action thriller. 6/10 stars.