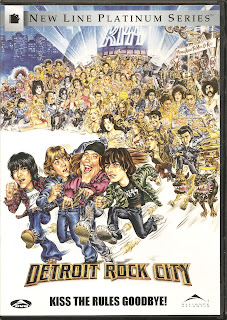 
Blurb From the DVD Jacket: “It’s 1978: bell-bottoms, day-glo, lava lamps and rock-n-roll define the generation. What’s a high-school rock band from Cleveland got on their mind? Getting out and hitting the city: DETROIT ROCK CITY!”


What Did I Learn?: Disco fans were huge assholes.


Really?: Where do I begin? Sex in a confessional booth? Shannon Tweed pays an underage boy for sex in her car? A kid is attacked by dogs, and he somehow not only befriends them but uses them to rescue both his mom’s stolen Volvo and a kidnapped girl?


Rating: KISS fans might not like this review, but Detroit Rock City isn’t worth two hours of your time. The movie is set in the past, but it’s about as authentically nostalgic as That ‘70s Show, and it’s really aimed at the teenager market. The four heroes aren’t very nice, while their antagonists (parents, a hall monitor, a gang of toughs in a convenience store, a couple of ginos in a gold Trans-Am, etc...) are just cartoonishly nasty. 5/10 stars.