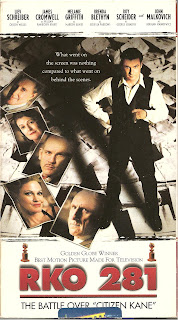 Please click the link to read my review of Citizen Kane – the very first Schuster at the Movies blog entry.
Synopsis: Precocious boy genius delights in poking a sleeping dragon.


Blurb From the VHS Jacket: “New from Executive Producers Tony Scott (Enemy of the State) and Ridley Scott (Thelma and Louise) RKO #281 – the working title for “Citizen Kane” has been called the greatest movie of all time.”


What Did I Learn?: Throwing violent, furniture-throwing temper tantrums at the studio head is the only way to get your movie made and distributed.


You Might Like This Movie If: You want to remember Orson Welles in his prime, before he started making those wine commercials. (Speaking of which, yeeeeeesh....)


Really?: It's hard to fill in this section, as RKO is basically a true story. I have to wonder, though, if James Cromwell based his performance of William Randolph Hearst on the real man, or on this guy. The similarities are striking at times.


Rating: The story behind the making of Citizen Kane was as fascinating as the movie itself, and RKO 281 tells it well. This isn’t a simple case of good guys and bad guys; Orson Welles could be a real jerk to those around him, while Hearst had some valid reasons to be upset at his portrayal. 8/10 stars.