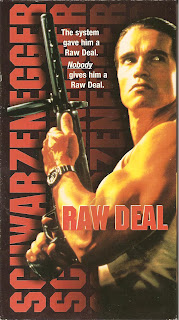 Synopsis: ‘Roided-up Austrian oaf  is just the guy to bring down the Chicago mob.

Blurb From the VHS Jacket: “The windy city is about to be blown away....Arnold Schwarzenegger is Mark Kaminski, a former FBI agent forced to resign from the bureau due to excessive violence. Now he’s a small town sheriff trying to solve the murder of his friend, Harry Shannon’s son by the Chicago mafia family, Petrovita.”

What Did I Learn?: It’s not a good idea to drink and bake at the same time.

Really?: 1) The feds recruit some musclehead with a German accent to infiltrate the Italian Mafia? 2) Did our hero’s wife know that her husband faked his own death in order to do some undercover work?

Rating: Raw Deal is not one of Ahhhhhnold’s better movies. 5/10 stars.