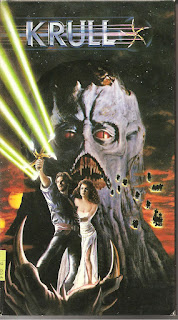 Synopsis: Blow-dried Prince opens a can of whoop-ass on invading alien army with bladed Frisbee.


Blurb From the VHS Jacket: “Journey into a mystical time and place that belongs to neither the past nor the present, where extraordinary creatures of myth work their incredible magic, and where a horrific, omnipotent Beast is the ruler. This is the planet of Krull!”


What Did I Learn?: If you’re a king, and your planet has been invaded by some bad dudes with superior technology, you MIGHT want to at least temporarily vacate that big, white castle of yours. Who knows – they could attack on the night of your daughter’s wedding.


Really?: How did the gang suddenly obtain horses? And where did the flying horses come from? And why did they climb up the dark fortress when they could have used those flying horses? And why did the Slayers always wind up fighting the good guys with swords when they could have simply fired lasers at them? And how did the Princess know that her hubby had the power to shoot fire from his hands when he had no idea, and...


Rating: Krull is a cheesy, clichéd, badly-written, low-budget sword-and-sorcery rip-off from the early 1980s (Liam Neeson mostly looks embarrassed, and probably did it for the paycheque). Watch this film strictly for laughs. 3.5/10 stars.