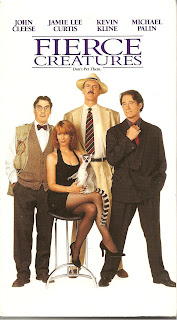 
What Did I Learn?: You don’t need firearms to round up a runaway anteater.


You Might Like This Movie If: You enjoy watching John Cleese and Michael Palin argue over animals. (It's not quite what you think...)


Really?: The gang was able to type out that new will pretty quickly after Rod McCain bit the dust.


Rating: Fierce Creatures has its moments of hilarity, but it doesn’t really get going until the last half hour or so. The rest of the movie sort-of meanders. Cleese does a few too many Freudian slips, Palin is just irritating as a zookeeper who can’t shut up, while Curtis and Kline keep walking in on Cleese whenever it looks as though he’s in a midst of enjoying a huge orgy. Interestingly, Kline’s and Cleese’s characters are stuck in ‘tweener’ (a pro-wrestling term meaning between ‘heel’ and ‘babyface’) status most of that time, so the audience has no idea if they should be cheered or booed. Fierce Creatures isn’t a bad film, but the script could have used a re-write, and it’s not nearly as funny as Wanda. 7/10 stars.