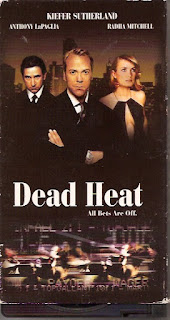 Synopsis: It’s basically two hours of Kiefer Sutherland lashing out at anyone who tries to help him out of his alcohol-driven pity-party, with some horse racing thrown in for good measure.
Blurb From the VHS Jacket: “All bets are off.”
What Did I Learn?: If you’re ever thinking about getting into the horse-racing business, you would be well-advised to remember that it’s not such a hot idea to hire a jockey who has a gambling problem.
You Might Like This Movie If: You figure it must be related to that other Dead Heat movie, which featured Joe Piscopo and Treat Williams.
Really?: How can Pally (Sutherland) punch out his ex-wife’s new boyfriend, and not wind up in jail? 2) Pally loses his badge when he suffers a heart attack pursuing a bad guy who runs off the police department’s buy money. I thought for sure he might encounter this thug during his dealings with Frank Finnegan and avenge this wrong, but it never happens. 3) Why are Sutherland and Anthony LaPaglia wearing dark suits and ties on the VHS box? I don’t remember any of them dressed in business attire at any point in this movie.
Rating: I have to admit that I was pleasantly surprised by Dead Heat – Kiefer Sutherland’s last film before he starred in the television series 24. This low-budget film is a bit clichéd in place (how many times have we seen the unemployed-cop-gets-drunk-and-plays-with-his-firearm trope?) and slow to start, but it quickly picks up when Pally’s half-brother Ray (LaPaglia) enters the picture and involves him in a questionable venture. The film’s humour, and the buddy chemistry between LaPaglia and Sutherland elevate what might otherwise have been a humdrum crime drama. 8/10 stars.