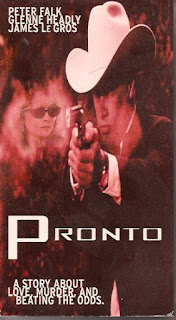 Synopsis: Ok, do you remember that bookmaker character Peter Falk played in Vig? Well, just imagine that guy as Walter Matthau’s character in Hopscotch, except he’s pursued in Italy by the ten-gallon hat-wearing lawman from Coogan’s Bluff, as well as incompetent mafia assassins rather than bumbling CIA goons. That pretty much sums up Pronto.
Blurb From the VHS Jacket: "A story about love, murder, and beating the odds."
What Did I Learn?: Ezra Pound said some cryptic shit when he was asked straightforward questions.
You Might Like This Movie If: You expect a task to be performed pronto.
Really?: 1) I had a bit of trouble believing ‘the Zip’ would let Raylan go after murdering Harry’s pal Robert right in front of him. Holy shit, Raylan’s a witness to a murder, he iced one of the Zip’s henchmen, and it would have been super-easy to put a bullet in his head. 2) So, is Harry a whimsical and basically decent individual who just happens to work on the fringes of organized crime, or a cold-hearted and extremely selfish bastard? The script does a few U-turns with the development of Harry’s character, so this is never entirely clear. 3) See: “What Did I Learn?” Seriously, Harry’s fascination with Pound seems a tad contrived.
Rating: Based upon an Elmore Leonard novel, Pronto is a rather slow-moving thriller that’s never entirely sure if it should place its focus on Raylan or on Harry, so I still don’t know who’s the actual protagonist. Still, I like Peter Falk, and Pronto more-or-less works as light fun. 7/10 stars.