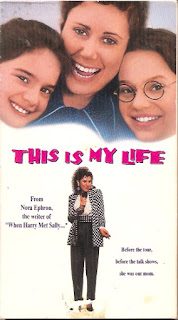 Synopsis: Hilarity ensues when self-centred comedienne abandons her precocious brats for weeks at a time.
Blurb From the VHS Jacket: “Before the tour, before the talk shows, she was our mom.”
What Did I Learn?: JD Salinger may or may not have a telephone, but everyone on the planet is nevertheless only two phone calls away from him.
You Might Like This Movie If: You're in the mood to watch a suspiciously articulate and supposedly-improvised monologue.
Really?: 1) Ok, I have to wonder…how does Erica have enough money to pay a private investigator to find her dad, and how can the dude take her case when she’s obviously a teenager? 2) Gee…Dan Aykroyd doesn’t have much of a part in this film, does he? When he isn’t staring at Dottie like a love-struck teenager, he takes a lot of undeserved abuse from Erica and never seems to react. 3) So, Aunt Harriet kicks the bucket, Dottie’s very first thought is to sell the beloved home she inherits (thereby displacing both of her daughters), and nobody seems to mind. 4) Erica’s and Opal’s journey to visit their estranged father is one of the better scenes in this film, but I had a great deal of trouble believing they wouldn’t simply call him first, or that they would seriously believe he would object to Dottie getting married again. 5) Gee…I guess Erica didn’t really like her goofy new boyfriend. Yet another unresolved subplot. 6) See: "You Might Like this Movie If."
Rating: This is My Life isn’t quite a bad movie – I liked Mathis’ performance, and it’s clear that writer/director Nora Ephron does her heartfelt best to address the conflict between Dottie’s ambition and her love for Opal and Erica, but it really falls flat, mostly because the script veers uneasily between treacly melodrama and a mediocre sitcom, and any time I heard Julie Kavner’s voice I immediately thought of Marge Simpson. Oh, and I have to deduct an entire half-star for an atrocious, fingernails-on-the-blackboard soundtrack from Carly Simon. 5.5/10 stars.