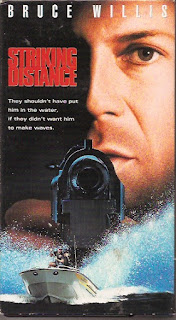 Synopsis: Bruce Willis portrays an alcoholic former homicide detective who attempts to solve a major case….oh wait, that’s the Synopsis for The Last Boy Scout, Hostage, 16 Blocks, Die Hard With a Vengeance….
Blurb From the VHS Jacket: "They shouldn't have put him in the water. If they didn't want him to make waves."
What Did I Learn?: There’s an old Italian saying: never scald your tongue on another man’s soup. There’s also an old Irish saying: never listen to old Italian sayings. 2) The Simpsons are on an hour earlier in California than in Pittsburgh. 3) Jimmy is the best cop.
You Might Like This Movie If: You understand the importance of being within striking distance. [These people are really, really stupid, by the way]

Really?: [Spoiler Alert] 1) So, Jimmy is the killer? WTF?!? How did he survive falling off that bridge, how does he support himself, and why did he start murdering women again after a two-year hiatus? (Come to think of it, why did he start in the first place?) I understand the ending was completely re-written when it tested poorly with audiences, so I have to assume this plot twist was created because people felt that making Danny the murderer was too obvious. 2) Take a drink any time Bruce Willis gets into a screaming match with Dennis Farina or Tom Sizemore. One screaming match is dramatic; 18 screaming matches is just tiresome.
Rating: Bruce Willis famously apologized for this film, saying in an interview that it “sucks.” I wouldn’t go quite that far – it’s fine for a night’s entertainment but it does have some major problems, including a script that’s riddled with clichés and a ridiculously implausible ending (see: “Really?”). Striking Distance features some impressive action sequences, including a top-notch car chase, so I’ll give it a barely-passing grade. 5.5/10 stars.