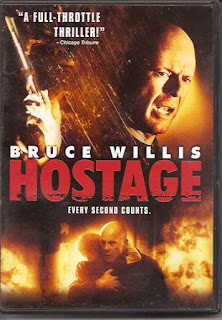 Synopsis: Bruce Willis portrays a bald, stone-faced and deeply-troubled law enforcement officer who must suddenly cope with a major crisis. Wait, doesn’t that pretty much describe every movie Bruce Willis makes these days?
Blurb From the DVD Jacket: “Every second counts.”
What Did I Learn?: 1) Cops play golf when they retire. 2) Rich people always got a way out. 3) Only God gets to decide who lives and dies.
You Might Like This Movie If: You're ok with Bruce Willis basically sleepwalking through this stage of his career.
Really?: 1) Gee, nobody notices that Tommy essentially goes missing for long stretches of his supposed captivity, and the air duct system can take him anywhere in the house? Gee, that’s convenient. 2) So, Walter Smith (Kevin Pollak) is near-death from too many blows to the head, yet he makes a miraculous recovery, and even later agrees to assist Tally in killing his former accomplices? 3) Hmm…Tally doesn’t do a very good job of following instructions from the mob villains, does he? 4) Gee….I really didn’t buy Mars’ transformation into some sort of Kaiser Soze-like killing machine.
Rating: Bruce Willis needs to hire a better agent, or do a better job of picking scripts, because like many of his other recent cinematic choices, Hostage is humourless, excessively violent, populated with unlikeable characters and utterly pointless. The film might have worked a lot better had the mob villains been removed from the script, and replaced with more of a psychological cat-and-mouse dynamic between former hostage negotiator Tally and the young punks in the house. Instead, we’re treated to a convoluted mess that completely falls apart in the third act. I cannot recommend this movie. 3/10 stars.
Would it Work For a Bad Movie Night?: No, but take a drink any time you find yourself asking: “would a chief of police really do that?”