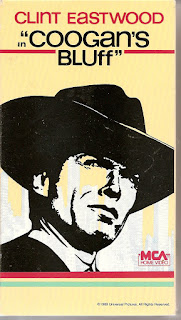 Hey, this would have been perfect for my tribute to Clint Eastwood's Not-Dirty-Harry cop movies!

Synopsis: Police officer travels to strange new location, fights crime, and feels like a fish out of water. Oh wait, that’s the Synopsis for In the Heat of the Night...and Beverly Hills Cop... and Black Rain...and Die Hard.... and The French Connection II, come to think of it.

Blurb From the VHS Jacket: “This Eastern-Western set in modern-day New York tells of an Arizona sheriff who accompanies his extradited prisoner and then loses him in the concrete canyons of Manhattan.”

What Did I Learn?: There’s only one Bloomingdale’s. If you pass it more than once during a cab ride in New York City, you are perfectly within your rights to withhold a tip.

You Might Like This Movie If: You know that while it's fun to watch an Arizona country boy like Coogan match wits with stuffy bureaucrats and obnoxious New Yorkers, there's no way in the world he would ever come back to the big city, or that this adventure could lead to anything permanent. Oh, wait...
Really?: 1) So, let’s see: Coogan somehow manages to clobber eight or nine men during a barroom brawl, and even though he’s more-or-less beaten to a pulp once it’s all over, he’s still right as rain for action the next day? 2) Wait – Coogan’s boss in Tex....uh, Arizona orders him to return home, yet he refuses? Can he afford a possibly lengthy stay in the Big Apple if the Sheriff’s Department stops paying his expenses? How does he know he won’t get canned for insubordination?

Rating: If you’re a fan of Eastwood’s Dirty Harry films, you might want to check out Coogan’s Bluff, as it was the first pairing of the iconic star with director Don Siegel, and Eastwood plays a strange cross between Harry and his earlier Man with No Name character. The film has some enjoyable moments, but it feels dated, and there isn’t much action. 7/10 stars.