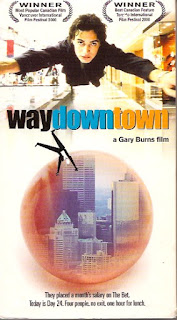 Synopsis: Hilarity ensues when bored-and-obnoxious cubicle rats make an ill-advised wager.
Blurb From the VHS Jacket: “They placed a month’s salary on The Bet. Today is Day 24. Four people, no exit, one hour for lunch.”
What Did I Learn?: 1) If you’re thinking about committing suicide by jumping out one of those office tower windows, you should fill a 2-litre pop bottle with marbles and heave it at the glass in order to make a hole. 2) A really nice vase at Birks could run you about $3000.
You Might Like This Movie If: You know it can take at least 24 days to get way downtown.
Really?: 1) Don’t these people have any real work to do? 2) So, is there some reason Tom’s shirt and tie keep changing? The events in this film take place during a single lunch hour and early afternoon.
Rating: I hadn’t seen Waydowntown since a buddy brought it to a get-together of friends in the early 2000s; at the time, I thought the film didn’t make much sense, and wasn’t particularly funny or clever, so it’s amazing what a second viewing of a film can accomplish. Waydowntown is a low-budget, but highly imaginative dark satire on urban lifestyles and the mores of office culture. Check it out. 8/10 stars.