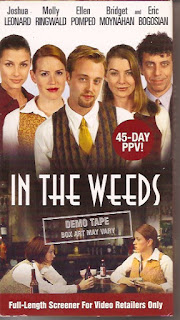 I could have used this for my tribute to Molly Ringwald in 2012. Please click the links to read my reviews of two other restaurant-related films: Dinner Rush and Big Night.
Synopsis: Hilarity ensues when underachieving waiters in their early-30s deliver food to obnoxious customers.
Blurb From the VHS Jacket: “More sexy comedy fun from Miramax Home Entertainment!”

What Did I Learn?: If you haven’t hit the big time in the entertainment industry by your late 20s, and you’re still working a dead-end job to pay the bills, it’s time to make some major career decisions.
You Might Like This Movie If: You know that waiting tables isn't easy.
Really?: 1) I had a hard time believing the belligerent chef could somehow stay gainfully employed at this restaurant, considering he openly refers to Simon (the owner, played by Eric Bogosian) as a “pussy” and barely lifts a finger to ensure Simon’s meal with an investor goes off without a hitch. (And Simon somehow blames the wait staff, rather than the kitchen staff when his food is late?)  2) So, what is Chloe (Ringwald) actually doing with her life, aside from waiting tables and taking crap from Simon? I assume her claims of a giant inheritance were smack-talk for the table of divorced men. Why is the chef so nasty, and why is Becky banging him when she apparently has a boyfriend? Why is Simon such a jerk, and why is he trying to sell the restaurant? For a film that doesn’t have much of a plot, it’s strange that it introduces so many characters without ever bothering to develop them, and it doesn’t provide that much insight into the lives of the people we meet.
Rating: In the Weeds has a few credibility and character-development issues (see: “Really?”), but it’s otherwise an enjoyable, compelling and surprisingly endearing drama about  a group of people who really need some career guidance. 7/10 stars.