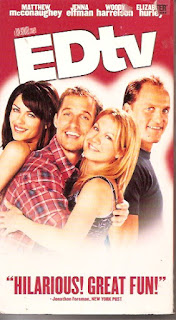 Synopsis: It’s a lot like The Truman Show…turned into a contrived and mediocre romantic sitcom by Ron Howard, Lowell Ganz and Babaloo Mandel.
Blurb From the VHS Jacket: "Superbly directed by Ron Howard and featuring a stellar cast including, Elizabeth Hurley, Sally Kirkland, Martin Landau, Ellen DeGeneres, Rob Reiner and Dennis Hopper, EDtv is an outrageous look at instant fame, overnight success, and sharing your life with a few million of your closest friends."
What Did I Learn?: 1) You put *anyone* on television sixteen hours a day, and sooner or later they’re going to fall off a table and land on a cat. 2) If you’re over thirty and your job requires you to wear a name tag, you screwed up your life.
You Might Like This Movie If: you firmly believe reality television was the best thing to emerge out of the 1990s.
Really?: 1) So, wait…Ed signed a contract that doesn’t allow him to exit the show? And he can be held in breach of contract if he stops “living a normal life?” (I have no idea how anyone could make that case in court, or why the network apparently doesn’t care if its dirty laundry gets aired in public). And the network can get away with harassing the rest of Ed’s family because they signed waivers, yet they aren’t getting paid for their trouble? I realize Ed isn’t the sharpest tool in the shed, and it’s possible he signed this document without the advice of counsel, but is any of this even remotely legal? 2) I can’t believe Howard cast his former Happy Days co-star Don Most (best remembered as Ralph Malph) and didn’t give him a single funny line of dialogue.
Rating: EDtv is a sometimes-funny, albeit fluffy and forgettable film that’s never entirely sure if it wants to be a romantic comedy or a scathing satire of the television industry. While I liked the chemistry between McConaughey, Jenna Elfman and Woody Harrelson (who pretty much steals the first third of the film as Ed’s ne’er-do-well brother before he essentially disappears), EDtv doesn’t have anything clever or interesting to say about the reality television format, and it drags in the third act. 6/10 stars.