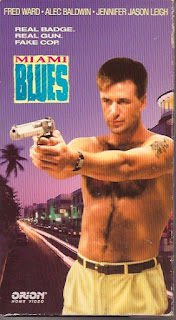 Synopsis: Miami’s least competent cop pursues city’s most fortuitous criminal…who happens to be dating its dumbest hooker.
Blurb From the VHS Jacket: “Real badge. Real gun. Fake cop.”
What Did I Learn?: 1) It takes balls of steel to rip off a gang of drug dealers when you’re armed only with an Uzi-shaped squirt gun. 2) The first thing they teach in hooker classes is not to ask the client so many fucking personal questions. 3) Married people are a team: they work together and they get rich.
You Might Like This Movie If: You've always wanted to hear Alec Baldwin do a terrible Al Pacino impression.
Really?: 1) See: “Really?” #1. Seriously, Freddie (Baldwin) has to be the most reckless crook I’ve ever seen in a film; and he takes huge risks for what – purses and suitcases? You would think he might eventually set his eyes on bigger targets or become more of a con artist. 2) See: “Synopsis.” How does Freddie somehow manage to always be in the right place at the right time when a crime is occurring? Come to think of it, why does he focus mostly on ripping off drug dealers and other criminals? (Not entirely, of course, which limits his likeability to the audience). Freddie is the protagonist, but we never learn much about his motivations. 3) So, wait…. Freddie beats the snot out of a detective, takes his gun, badge and handcuffs, and the cops don’t make much of an effort to find him? And Freddie actually sticks around Miami?
Rating: Miami Blues is an ok thriller that wears out its welcome somewhere in its second act as Freddie becomes an increasingly unsympathetic protagonist; Baldwin does his best with the material, but he was miscast as the manically-impulsive Freddie, and it shows. As I watched this film, I kept wondering why Sgt. Moseby (the talented, yet tragically underrated Fred Ward) wasn’t given more screen time, and wasn’t turned into a worthier adversary for Freddie because Moseby seems like an interesting character and Ward does a nice job of portraying him. 6/10 stars.