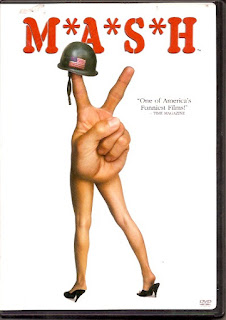 War Movie #2 (My apologies - I meant to post my reviews of M*A*S*H and The Big Red One last month)
Synopsis: Psychotic surgeons stitch servicemen, steal supplies, sing silly songs, smear superiors, sap soldierly spirit.
Blurb From the DVD Jacket: “One of the most acclaimed comedies, M*A*S*H focuses on three Korean War Army surgeons brilliantly brought to life by Donald Sutherland, Tom Skerritt and Elliott Gould.”
What Did I Learn?: 1) Suicide is painless. 2) Informality is inconsistent with maximum efficiency in a military organization. 3) You can’t really savour a martini without an olive.
You Might Like This Movie If: You're in the mood for conflict...and mash.
Really?: Wait – these people are just a few miles away from a combat zone, and they’re somehow able to arrange a football game, complete with a flat, mown lawn, and professional lighting? Speaking of that strangely-inserted football game, why in the world would Major Houlihan (aka “Hotlips”) cheer for the 4077 team after they publicly (and cruelly) humiliated her on several occasions? 2) So, Hawkeye, Trapper and Duke can get away with physically abusing or psychologically torturing senior officers simply because they’re surgeons? Has anything like this ever happened in the US military?
Rating: I had never seen M*A*S*H (nor the long-running TV series that came shortly afterward) until recently, so I was unprepared for how dated, juvenile, unfunny ,and mean-spirited it may seem to contemporary viewers. Hawkeye Pierce and Trapper John are two of the most obnoxious bullies to ever appear on the silver screen, and I’m shocked that audiences were asked to sympathize with them, let alone cheer them on when they humiliate, degrade, and even physically assault superior officers who have the gall to question them. Oh, and it's strange how a supposedly anti-war film actually has very little say about war, or its combatants. I cannot recommend this movie.

Would it Work For a Bad Movie Night?: Probably not, but take a drink any time Hawkeye, Duke or Trapper really deserve a punch in the mouth.
https://www.imdb.com/title/tt0066026/?ref_=nv_sr_2