Harley Davidson and the Marlboro Man (1991) 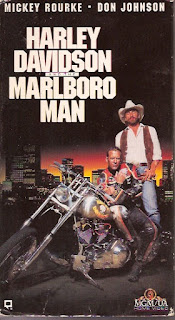 
Synopsis: Biker-and-cowboy-caricatures drive recklessly, bang supermodels, take down a drug-dealing bank(!) and otherwise ooze plenty of toxic masculinity. [Just to be clear: I use the term “toxic masculinity” facetiously]
Blurb From the VHS Jacket: “When the going gets tough… the tough take the law into their own hands.”
What Did I Learn?: 1) It’s better to be dead and cool than alive and uncool. 2) Never chase buses or women, you’ll always be left behind. 3) It only takes a couple of scumbags to stink up a convenience store. 4) The older the bull, the stiffer the horn. 5) Guns are meant to be shot, not thrown.
Oh, and the five rules for shooting a game of pool:

Lesson #1: Always shoot with a cigarette in your mouth;
Lesson #2: Always know the table before you shoot;
Lesson #3: Make sure you chalk that stick REAL GOOD before each shot;
Lesson #4: Never make a bet if you can’t pay the debt;
Lesson #5: If you lose, make sure you stand up straight and tall.
You Might Like This Movie If: See: "What Did I Learn?"
Really?: Haha – where do I even start? 1) First of all, aside from Marlboro’s girlfriend, where are the cops? Daniel Baldwin and his Kevlar-wearing goons murder a bunch of people (including an airport baggage handler on the tarmac!), and fire off automatic weapons in public, yet we never so much as hear a siren. And wouldn’t Baldwin retrieve the bodies of his fallen comrades, at least to prevent a police investigation? 1b) Come to think of it, could Harley and Marlboro possibly hide out in the baggage compartment of a jet with a corpse and a kidnapped baggage handler, fly to Las Vegas, and then escape into the city without encountering the cops, or airport security? 2) See: “Synopsis.” Seriously, isn’t running a bank a fairly difficult job? How would Wilder have the time, or the criminal expertise to oversee a drug empire? 3) So, Marlboro steals a motorcycle belonging to his lady’s new fiancé, and even gets to meet the dude later in the film, yet nobody even mentions the theft and there are no consequences? 4) Call me a lazy slob, but I’m pretty sure I would require medical attention after getting shot in the arm twice; I don’t think I would be physically up for a final showdown with a drug lord. 5) I have to admit that I’m a little fuzzy on the revenge plan…. Harley and Marlboro want to kill Wilder, but return the stolen money to renew a lease on the bar, even though none of their friends are alive to operate it? Am I getting that right?
Rating: Harley Davidson and the Marlboro Man is a trashy, foul-mouthed and excessively violent early-1990s reimagining of Butch Cassidy and the Sundance Kid. It’s not a very good movie, but HDatMM never takes itself too seriously, its script includes some enjoyable one-liners and pseudo-philosophical musings, and I’ll admit that I like the chemistry between Rourke and Johnson, even though the two of them hated each other during filming, and they apparently won’t work with each other even today. 6.5/10 stars. Yes, I know I’m being overly generous. In the spirit of Bad Movie Night: take a drink any time Baldwin or his goons can’t seem to hit either Harley or Marlboro even though they’re firing machine guns.