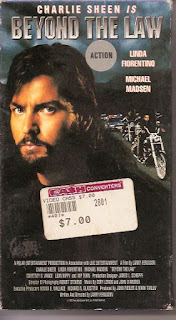 Terrible Biker Movie #1 [Yes, CA$H Converters seriously wanted $7 for a copy of this film]
Synopsis: Hot-headed cop who was physically abused in childhood infiltrates biker gang because…. Come to think of it, Charlie’s motives are never made terribly clear.
Blurb From the VHS Jacket: “Charlie Sheen is a fearless cop, who goes undercover in order to infiltrate a notoriously vicious motorcycle gang, in this film based on a true story.”
What Did I Learn?: 1) Being tired is a lot better than being dead, man. 2) The Pythons are a “sissy ass” biker club. 3) Nobody lives forever. 4) Charlie Sheen does a horrible French accent….which may explain why he wasn’t chosen to play Inspector Clouseau in the Pink Panther remake. 5) It is easy to go down in to hell; night and day the gates of dark death stand wide; but to climb back up again, to retrace one's steps to the open air, there lies the problem, the difficult task (Ok, that’s from The Aeneid) 6) Would any self-respecting biker accept the nickname of “Oatmeal?” How did he acquire that monicker? Does he eat a lot of fibre?
You Might Like This Movie If: You always knew Charlie Sheen has a unique ability to portray a guy who's slowly losing his marbles.
Really?: 1) Charlie Sheen as a badass biker….okaaaaaaay. 2) Hold on… Dan starts his motorcycle inside his apartment, drives it out of the building, and leaves his front door wide open? What is this, a scene from Cheech and Chong’s Next Movie?!? 3) Hmm….I seem to remember Virgil using red spray-paint on part for Dan’s motorcycle, but the finished product is entirely black with blue highlights. 4) Speaking of Virgil, I didn’t exactly buy his character…. he fixes motorcycles for biker gangs, yet he claims that he really, really wants to be a cop, so Dan trusts him implicitly? Wouldn’t it make more sense for him to be a retired cop/DEA agent who teaches Dan the ropes about bikers and going undercover? Did anyone do that before Dan begins his new assignment?
Rating: Beyond the Law is not a great movie by any stretch of the imagination – the script is clichéd, and suffers from some credibility issues (see: “Synopsis”, “What Did I Learn?” and “Really?”), but it exceeded my admittedly low expectations only because Sheen does his best with the material (even though he was miscast) and the narrative – which is based upon the true undercover work of the real Dan Saxon – is somewhat compelling. I’ll give Beyond the Law a barely-passing grade. 5.5/10 stars.