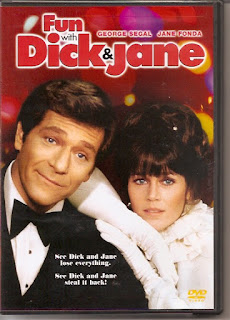 Synopsis: Middle-class family learns the hard way that crime pays, and working hard for the American Dream is for chumps.
Blurb From the VHS Jacket: “George Segal and Jane Fonda star in this hilarious send-up of upper middle class mores and the price people are willing to pay to maintain a comfortable lifestyle.”
What Did I Learn?: If a crowd starts to gather as the repo men are grabbing your few, meagre possessions, your best course of action to salvage your self-respect is to loudly yell: “that’s not the model we ordered - get it out of here immediately!”
You Might Like This Movie If: You know it isn't easy to successfully rob a convenience store.
Really?: Funny how the cops never seem to zero in on our heroes, even though they stop wearing masks, or any sort of disguises during the later holdups!!
Rating: I’m probably being overly generous with my rating, but I genuinely liked Fun With Dick and Jane. Segal and Fonda share some sparkling comedic chemistry (it’s also rather interesting to see Ed McMahon do something besides guffaw on Johnny Carson’s couch), the script is subversively funny, and it’s difficult to dislike these flawed, but all-too-human characters. That said, the film’s humour is very much a product of the late 1970s, so it may rub politically correct viewers the wrong way. 9/10 stars.