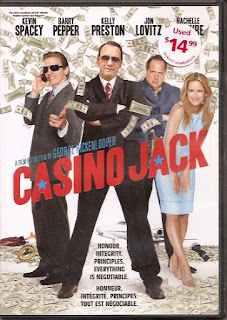 Synopsis: Kevin Spacey plays a viciously aggressive, lying and completely amoral douchebag who… no, wait, that’s the Synopsis for Swimming with Sharks….and Horrible Bosses….and Glengarry Glen Ross….and House of Cards…and The Big Kahuna (sort of).
Blurb From the DVD Jacket: “Honour. Integrity. Principles. Everything is negotiable.”
What Did I Learn?: 1) Washington is like Hollywood, only with uglier faces. 2) Jack Abramoff loves the movies and works out every day. 3) Mediocrity is where most people live.
You Might Like This Movie If: You know that persuading others to accept a not-so-advantageous deal isn't always easy.
Really?: Casino Jack is based upon a true story (the script even uses real names!) so I want to tread carefully in this section, but man… Abramoff and Scanlon (Barry Pepper) are so aggressive and obnoxious in this film I had a hard time believing they could somehow become Washington super-lobbyists.
Rating: Casino Jack is an interesting film that more-or-less works both as a savage satire of the George W. Bush-era Republican Party, and as a crime thriller even though neither Abramoff nor his protégé are come close to being likeable, and the script tries to bite off more than it can chew; for example, we’re told near the end that Abramoff had developed some ties to the Putin government in Russia, but this is never explored or developed. Oh, and I have to give special kudos to Jon Lovitz for a spirited performance as Adam Kidan; I howled with laughter when I watched the scene where he’s stabbed numerous times by a ballpoint pen. 7/10 stars.