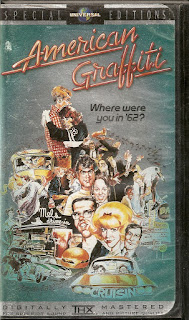 Blurb From the VHS Jacket: “Capture the heart of America’s last age of innocence with American Graffiti.”

What Did I Learn?: 1a) Wolfman Jack really liked popsicles,  1b) It’s a bad idea to shake the hand of a guy who just ate a popsicle. 2) Rock n’ roll went downhill after the death of Buddy Holly, and surfing music sucks.

You Might Like This Movie If: You realize there's no such thing as an original idea.
Really?: 1) Ok, I realize Love and the Happy Days debuted before this movie was released, but I can’t believe how many things Garry Marshall strip-mined from this movie in order to create Happy Days: cars, characters, guest-starring actors, even the opening scene of a drive-in-diner with “Rock Around the Clock” playing in the background. It reminds me of how much Friends was a complete rip-off of Singles. 2) So, only the male characters are given title card epilogues?

Rating: American Graffiti might be a tad overrated, but it’s still a warm, funny, and thoroughly enjoyable nostalgia trip that’s well worth checking out, especially if you grew up watching Richie Cunningham exchange witticisms with the Fonz. Highly recommended. 9/10 stars.