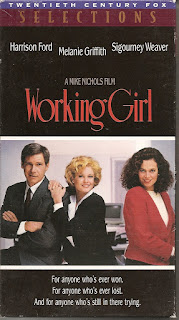 What Did I Learn?: 1) “Never burn bridges. Today's junior prick, tomorrow's senior partner!” 2) “You don’t get ahead in this world by calling your boss a pimp.” 3) Apparently, the key to succeeding on Wall Street is to crash weddings and other high-powered social events, claim some sort of long-forgotten friendship with a VIP, and then launch into a business spiel.


Really?: 1) Hold on, Melanie Griffith is the fucking protagonist, and she gets third billing in this movie behind the villain (Sigourney Weaver), and the romantic interest (Harrison Ford), who doesn’t even appear in the first half hour? Who negotiated that deal? Did Griffith have the world’s worst Hollywood agent at the time? 2) Katherine (Weaver) is taller than Tess, and according to Tess, Katherine has a “bony ass,” yet Tess can somehow raid Katherine’s wardrobe, and everything fits like a glove? 3) Tess catches her boyfriend Mick (Alec Baldwin) banging another girl, and yet she agrees to slow-dance with him several days later at a wedding? This does not ring true.

Rating: Working Girl is a highly-contrived (see: “What Did I Learn?” and “Really?”), but otherwise enjoyable late-1980s comedy with a great cast (Kevin Spacey, Nora Dunn, Olympia Dukakis and Joan Cusack appear in supporting roles) and a great performance from Weaver as Tess’ evil-yet-insecure boss. I'm not a huge Melanie Griffith fan, but she's very likeable in this film, and it's hard not to root for her character. 7/10 stars.