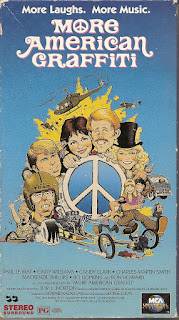 Hmm...it occurs to me that while More American Graffiti isn't a Vietnam movie per se, I could have included it in my review of Vietnam War films a few years ago.

Blurb From the VHS Jacket: “More American Graffiti is sure to evoke memories of a time when America was full of passion and change. A time when becoming an adult meant laughing, crying and savouring old friendships.”

What Did I Learn?: Stay away from marijuana – it could lead you into cigarettes.

You Might Like This Movie If: You're desperate for 1960s nostalgia.
Really?: 1) So, wait...Terry the Toad (Charles Martin Smith) has been in Vietnam for about a year. Why is he trying to get himself injured when his tour of duty will almost certainly end fairly soon? 2) I realize the scene where Laurie (Cindy Williams) bursts into singing “Baby Love” is quite moving, and demonstrates her courage in the face of police repression, but if I just saw a cop smack a prisoner for giving her the finger, I’m pretty sure I would keep my mouth shut.

Rating: More American Graffiti is often cited as one of the worst sequels ever made, and even George Lucas admitted years later that he had no idea why he created it. The film isn’t nearly as bad as it’s made out to be, but it does have some problems, the biggest being that the different storylines don’t mesh well with each other, and it’s hard to care about Debbie’s (Candy Clark) adventures in Haight-Ashbury. Give More American Graffiti a try only if you really loved the original. 6/10 stars.