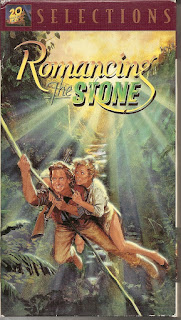 Synopsis: Danielle Steele somehow wanders into the first 15 minutes of Raiders of the Lost Ark.

Blurb From the VHS Jacket: “MICHAEL DOUGLAS and KATHLEEN TURNER have the adventure of their lives in this hugely successful romantic caper co-starring DANNY DEVITO.”

What Did I Learn?: 1) The Doobie Brothers broke up at some point before 1984. 2) There are two ways to die...slow, like a snail, or fast, like a shooting star. (I would also accept “quick like the tongue of a snake, or slower than the molasses in January.”)


Really?: Romancing the Stone never takes itself too seriously, so I don’t want to sound overly critical, but I have to ask: 1) who buried the stone inside a cheesy ceramic piggy bank, and how long was it actually in the ground?, 2) and wouldn’t a wealthy Colombian drug baron maintain good relations with the local cops? Wouldn't they at least knock on his door before shooting at his pickup truck?

Rating: Romancing the Stone is a charming, funny, and thoroughly enjoyable Robert-Zemeckis-directed action-comedy. Check it out if you’re in the mood for some pure escapism. 8/10 stars.