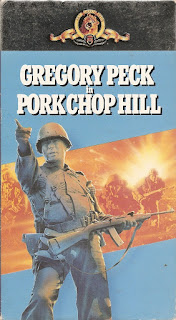 Synopsis: Gregory Peck rouses the troops for one last bloodbath before the Korean War officially ends.

Blurb From the VHS Jacket: “Pork Chop Hill tells the truth about war.”

What Did I Learn?: If you ever find yourself negotiating with a dude who doesn’t speak English, and he removes his translation earpiece right when you’re in the middle of a speech, you might as well take a break and grab a drink.

You Might Like This Movie If: You figure it must be a 98-minute-long Shake and Bake commercial.
Really?: I think writer James Webb could have provided a bit of back-story for Lt. Suki Ohashi, a Japanese-American infantry officer. Did he spend the previous war in an American internment camp, or did he fight in Europe? Why did he join the army? Webb establishes the character as Japanese-American, and then never develops him further.

Rating: Released just a year after Darby’s Rangers, Pork Chop Hill is a very different – and far superior – look at the day-to-day lives of fighting men. Peck delivers a terrific performance, and the script manages to be both anti-war, and anti-communist. Oh, and watch for Norman Fell (Mr. Roper from Three’s Company), George Peppard (Hannibal Smith from The A-Team), Rip Torn (best remembered as Artie from The Larry Sanders Show), and Robert Blake (Baretta). 8/10 stars.