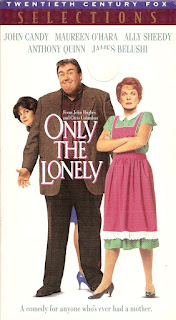 Synopsis: It’s basically 104 minutes of John Candy getting hen-pecked by his obnoxious mother, his demanding girlfriend, and his know-it-all best buddy before he finally decides to ditch two of the three. [Come to think of it, that’s remarkably similar to the Synopsis for Summer Rental, also featuring the late, great John Candy]
Blurb From the VHS Jacket: “This tenderhearted romantic comedy is the story of a loyal son forced to choose between his domineering mother and his first love.”

What Did I Learn?: It’s good to be a cop....you can get away with reckless driving, dropping a corpse several stories off a building on to the sidewalk below, using a fire truck for your very own marriage proposal, and stopping a busy train in a nearby town just so you can *talk* to one of the passengers (i.e. it’s not related to a criminal case).

You Might Like This Movie If: You figure it must be an extra-long Roy Orbison video.
Really?: 1) See: “What Did I Learn?” Honestly, I’m surprised Danny (John Candy) never faced any sort of disciplinary hearings, or even a lecture from his commanding officer. 2) I realize Danny is trying to be a good son to his mom (Maureen O’Hara), but she’s so gratuitously nasty, bigoted, and generally unpleasant that I had a hard time believing he wouldn’t have simply found his own apartment years earlier. 3) So, what’s the point of including Jim Belushi as Danny’s cop partner and best friend? He never once offers any support for Danny’s relationship with Theresa (Ally Sheedy), and his character is really just an afterthought by the end. 4) Funny how Theresa starts out as an incredibly shy woman who can barely express herself, and transforms into a confident, liberated woman almost overnight.

Rating: While I’m usually a sucker for the works of John Hughes, Only the Lonely was his only film where Hughes didn’t have a hand in writing the screenplay and it certainly shows. Candy and Sheedy share some lovely moments together, but the script is far too contrived, obvious and mean-spirited for my taste, and most of the humour consists of Danny getting tongue-tied, or imagining unfunny slapstick vignettes of his mother getting killed in a variety of ways. Chris Columbus’ script should have been re-written. 5.5/10 stars.