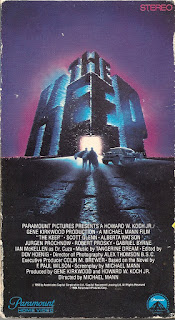 Synopsis: Nazis mess with the supernatural, and their faces melt. So, it’s basically Raiders of the Lost Ark with an atrocious sound mix, terrible acting, a script that stops making sense, and far too many scenes involving bargain-basement special effects and dry ice.

Blurb From the VHS Jacket: “A Gothic thriller which grips you with its combination of horror, romance and the supernatural.”

What Did I Learn?: Just because you can create a movie soundtrack consisting of choirs processed through a vocoder doesn’t mean that you should.

You Might Like This Movie If: You really want to see Ian McKellan match wits with a monster.


Really?: 1) Wow... this movie introduces a big, supernatural mystery and then it EXPLAINS NOTHING! Who is the demon, and why was he locked up? Who built the Keep? Who exactly is Glaeken (Scott Glenn), and how do he and the demon know each other? 2) I really hate to diss Tangerine Dream, considering they recorded outstanding soundtracks for Sorcerer and Michael Mann’s Thief, yet in most of this movie the music is wildly inappropriate for the scenes that are depicted. It’s a big annoyance. 3) Speaking of wildly inappropriate, why does Mann include a tantric sex scene between Glenn and Alberta Watson’s character? 4) So, a demon is slowly murdering an SS death squad. Who is the audience supposed to root for, exactly? 5) Come to think of it, why show the demon? The movie had a lot more suspense before the big reveal. 6) So, the SS goon Kaempffer (Gabriel Byrne) just shoots army Captain Woermann (Jurgen Prochnow)? How would he explain that to a military tribunal? 7) Gee, that "talisman" looks an awful lot like a flashlight to me.

Rating: See: “Synopsis,” “What Did I Learn?” and “Really?” The Keep starts out well with an interesting premise – German troops unwittingly unleash an evil presence when they occupy a mysterious fortress in the Carpathian Mountains, but it quickly falls apart for a variety of reasons, including dreadful acting by Glenn, Watson and Ian McKellan. I would have liked to have seen a lot more interplay between the humanistic Woermann and the sadistic Kaempffer but that relationship isn’t given much time to develop. I cannot recommend this movie. 4/10 stars.

Would it Work For a Bad Movie Night?: Absolutely! Take a drink every time a character decides to shout his or her lines. Take two drinks if it makes no sense to do so.