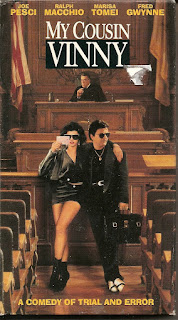 Blurb From the VHS Jacket: “With his street-wise style and flair for sticking his foot in his mouth, Vinny’s first case quickly turns into a hysterical escapade that has been judged as a must-see comedy hit!”

What Did I Learn?: 1) No self-respecting Southerner uses instant grits. 2) A whole lot of stuff about positronic traction and early-1960s GM cars that I can’t remember.


Really?: Wait, regardless of Vinnie’s (Joe Pesci) lies about being Jerry Gallo/Callo, and being allowed to practice law in New York, I had a hard time believing he would be allowed to represent Stan and Bill for an entire trial without having passed the Alabama bar exam.

Rating: Directed by Jonathan Lynn (who is probably best remembered as the man who wrote and created the brilliant Yes Minister), My Cousin Vinny is a cleverly-written comedy with an important message: it’s not always easy to obtain a fair trial when the resources of the state are stacked against you. Marisa Tomei is wonderful as Vinny’s long-suffering girlfriend, but the best scenes involve the back-and-forth bickering between Vinny and grumpy old Judge Haller (Fred Gwynne). They reminded me of the tortured relationship between Spicoli and Mr. Hand in Fast Times at Ridgemont High. Highly recommended. 10/10 stars.