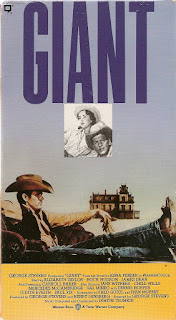 Please click the link to read my review of Come Back to the Five-and-Dime, Jimmy Dean, Jimmy Dean. (The making of Giant and the death of James Dean two weeks after completing his role in the picture were major events for the characters in the later film)

Blurb From the VHS Jacket: “Giant is just that, a film of staggering scale and grandeur in which cattleman Rick Benedict (Rock Hudson), his society-gilded wife Leslie (Elizabeth Taylor) and three generations of land-rich Texas sons and daughters love, swagger, connive and clash in a monumental drama of family strife, racial bigotry and conflict between cattle barons and newly-rich oil tycoons.”

You Might Like This Movie If: You want to watch the character who inspired the creation of a slightly-more-famous J.R.
Really?: Funny how the first two thirds of the movie deal with Leslie finding her voice, helping others, and adjusting to life among the Texans, and then she basically becomes a supporting character.

Rating: Dean provides a complex, and at times electrifying final performance as Jett Rink (you’re never entirely sure what to think of him until the end, when it all becomes clear), but Giant is otherwise an overly-long, and surprisingly dull epic. By the end, I really didn't care. 6/10 stars.